by
Derrick Foote
Duner and Foote 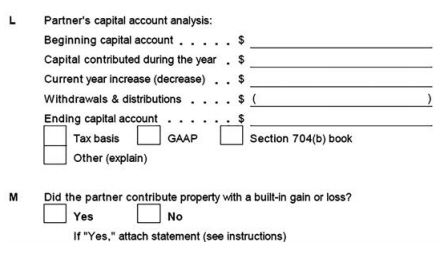 Oftentimes a partnership would choose to report each partner’s capital account reconciliation using Generally Accepted Accounting Principles (“GAAP”). This made a lot of sense since the financial statements are oftentimes reported under GAAP due to a requirement from a lender, language within an operating agreement or a regulatory requirement. Using the GAAP method gave the partner an understanding of their portion of the equity reported on the financial statements.

The IRS has been warning taxpayers the last couple of years that they were going to make changes to the reporting of partner’s capital on their K-1s. When the 2019 forms were issued in draft form, practitioners discovered that the only accounting method that could be used to report partner capital was the tax method. Partnerships were no longer allowed to report capital using another accounting method based on the 2019 draft forms. The IRS received feedback from the accounting community (specifically the Big 4 accounting firms) and recognized that many taxpayers and practitioners would struggle to adopt the new rules on such short notice. Under the regulations, it was the partner’s responsibility to track their tax capital, so some partnerships didn’t have each partner’s tax capital readily available. A partnership that reported capital under GAAP for instance, that had been in existence for a long period or had a significant number of partners, was faced with a challenging reporting burden. The IRS subsequently released Notice 2019-66, which provided relief and postponed the implementation of tax capital reporting until 2020 (taxable years that end on or after December 31, 2020).

For the 2020 reporting year partners’ capital will have to be stated on a K-1 using the tax capital method of accounting. The IRS recently confirmed the use of tax capital and the methodologies that can be used in determining partners’ tax capital under Notice 2020-43.

Under this method a partner’s tax capital is determined under the usual manner of increasing their capital by profits, contributions and their share of recourse liabilities and subtracting losses and distributions. This sounds straightforward, but if the partnership has not been maintaining tax capital what is the best way to obtain it? One option is to request the tax capital from each partner as it was previously their responsibility to maintain it. How many partners will respond to this request? I am guessing not too many.

One other option is that the manager or the practitioner can create a tax basis schedule model in lieu of requesting information from the partner. This may not be practical if the partnership has been in existence for several years and has a significant number of partners.

A partnership that cannot satisfy the Modified Outside Basis method can use the Modified Previously Taxed Capital method. This method is somewhat subjective in that you are determining the partner’s tax capital using the following steps:

The Modified Previously Taxed Capital Method requires a statement to be attached to each partner’s K-1 stating that this method is being used and describing the method in determining the value of the partnership.

Notice 2020-43 is requesting comments from the community regarding the proposed methods described above. I would suspect there will be changes to the methodologies listed above and there could be additional methodologies available. The one certainty is that tax capital will be required to be reported on each partner’s K-1 for 2020 filings. The only question is how we arrive at the tax capital number for each partner.

If you have a fund with a significant number of partners or has been in existence for a number of years it is best to discuss with your practitioner which approach is best for you to meet the tax capital reporting requirement. January will be here before we know it.